A Good Day To Die Hard has a problem.  A very big problem.  It has such a big problem that all of the other reservations I had going in seem insignificant in the grand scheme of things.  It’s not the focus on Jai Courtney as Jack McClane, the most transparent attempt to find a replacement lead to a long-running, big-name action franchise since Shia LeBouf in Indiana Jones & The Kingdom Of The Crystal Skull.  It’s not the move to Russia, which is pretty much the film-makers throwing their hands up in the air and admitting “We have no idea how to do a Die Hard movie anymore.”  And it’s not the last minute bowdlerised 12a edit for the UK that I had to see, because the studio hope to rake in an extra million quid or so from terrible parents.

No; the problem with A Good Day To Die Hard is that it’s boring.  Really, really, really boring.

The plot is almost the definition of paper-thin; John McClane (Bruce Willis) goes to Russia to help out his son Jack (Courtney) who has recently been sent to prison.  John, however, is unaware that Jack is a CIA agent and by merely showing up – that’s how much destructive power John McClane has nowadays – he’s blown Jack’s 3-years-in-the-making operation and now has to help him shepherd a Russian political prisoner (Sebastian Koch) to some crucial evidence.  It’s a plot that’s literally just there to connect the setpieces, but the film seems to think that its story is actually deep and grand, given how it stops for 10 minutes after every action beat to shovel exposition down your throat.  The bombastic score attempts to make dramatic moments seem like they matter when they don’t, and plot-twists that should change everything elicit nothing but a blink of the eyes due to pretty much everyone being a one-dimensional cut-out of an interesting character.

None of this is helped by the performances, which are highly underwhelming across the board.  Nobody is trying; least of all Willis, who has multiple moments where he quite clearly has stopped giving a sh*t and is just turning up that day for his paycheque.  Sam Worthington 2.0 does the necessary grunts and grimaces to be John McClane’s son and strives for pretty much nothing more.  Koch is a total non-entity who leaves about as much of an impression as a drop of water in the ocean.  Yuliya Snigir is this film’s attempt to replicate Maggie Q from Die Hard 4.0 but fails miserably by both giving her nothing to do and her being an appalling actress.  The only two people who seem to even be slightly enjoying themselves and, consequently, are fun to watch are Radivoje Bukvić as the closest thing that this movie gets to a proper villain, and Mary Elizabeth Winstead returning as Lucy McClane.  Bukvić because he seems to relish being on-screen at all and consequently tries to make the most of everything he’s given, and Winstead because, in the three minute cameo that she’s on screen for, she actually manages to foster some genuine chemistry with Willis, something that nobody else in the movie seems to be able to do (further proving my belief that you could pair her with a broom and she’ll still get more chemistry out of it than most romance films).

In fact, the almost universal attitude of “I don’t give a sh*t” in terms of performances is something that extends to almost every single other aspect of this movie.  Nobody making this movie seemed to care about anything other than getting this out of the door and the resulting paycheque that comes from it.  It really shows.  There are pretty much no stakes in this movie; almost criminal for an action flick.  Bullets fly everywhere, every third object seems pre-programmed to explode and pretty much all of Moscow’s highways are left in ruins by the end of the movie’s first setpiece… but it all means nothing.  The McClanes seem to be made of platinum by this point and can shrug off literally anything leaving, not one single doubt in your mind as to how this action sequence is going to go down.  The villains are literally nothing.  Ciphers, plot-devices, there because the movie needs a villain and for no other reason… until a third-act twist pops up that tries to recall that Hans Gruber moment from the first Die Hard but falls flat on its face due to the character that it attaches the plot twist to being, err, flat and dull anyway.

In fact, let’s just get right to heart of the problem, this movie is boring.  It’s absolutely stupid and dumb in ways that make Die Hard 4.0 seem realistic and restrained – the finale, mild spoiler, takes place in Chernobyl for possession of nuclear materials – but it forgets the one crucial ingredient that gave 4.0 a pass despite that: it’s not fun at all.  It’s not a serious movie but that constant “It’s good enough, let’s go to lunch, everybody!” feeling that is projected by the filmmakers bleeds into the product itself.  There is so little care or love going into this movie that it’s impossible for you to get invested either.  Things explode, bad guys get shot, Bruce Willis repeats how he’s “on vacation” which is the absolute closest thing the film gets to a John McClane quip; and all you’ll be doing is checking your watch waiting for this dull mess to be over.  After all, if nobody making the film could be bothered to have fun then why the hell should you?

A Good Day… attempts to make up for that lack of fun by instead trying to give you an industrial strength migrane.  This is absolutely the hardest time I have had trying to watch a film in a cinema in a long time because A Good Day… thinks that if it engages in enough sensory overload you’ll suddenly start being more interested in the film and have more fun.  Dialogue is buried extremely low in the mix but everything else is pushed right to the forefront with explosions and gunshots being jackhammers directly to your skull.  Editing is atrocious with the opening car chase being so disjointed that I frequently lost my bearings as to where everyone was and what was going on where.  Meanwhile, camera-operating duties were clearly handed over to a man who was permanently high on a semi-truck’s worth of speed and sugar because it never STAYS THE F*CK STILL!  Even during supposedly quiet moments, it lurches around like the guy badly needs a piss.  All of this adds up to a horribly disorientating experience that is hell to have to sit through.

But, in the end, it all comes back to one simple fact: A Good Day To Die Hard is not fun.  It is a soulless, 98-minute exercise in mind-numbing tedium that also wants to make you physically ill by watching it.  You know, I joked with my friend before seeing this movie that it could be a pile of crap but I’d be willing to forgive all of its sins if Mary Elizabeth Winstead turned up in the climax and used super Kung-Fu to beat all of the bad guys.  Even if that happened (it doesn’t), I still don’t think that I’d be willing to give this film a pass.  I haven’t seen such a relentlessly dull action movie in a long time.  It’s not entertainingly bad; it wishes that it could even rise to that level.

A Good Day To Die Hard’s biggest sin is that it is boring.  Relentlessly and depressingly boring.  Stay far away. 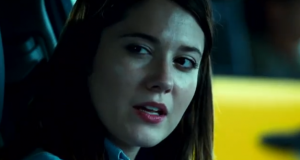 A quick note about the UK’s 12a cut.  (You can read more about the situation here):  The cuts and dubs are, honestly, rather noticeable but not for the reasons that you may think.  Sure, some are ridiculous (like simply cutting McClane’s catchphrase short rather than even attempting to hide it with anything) but most are only noticeable because they’re most prominent in the second half.  The first half of the movie keeps the F-bombs and the word “sh*t” is dropped like it’s going out of style, but then they just kind of… stop.

Russian subtitles constantly have insults that sound ridiculous and must have been edited to reach a 12a rating (it’s the only explanation that I have as to why a character is derogatorily referred to as an “old goat”, anyway), “Jesus” takes the place of “sh*t” as the Curse Word Of The Day and, again, they didn’t even attempt to hide the censoring of McClane’s catchphrase.

The most noticeable cut is, naturally, the complete lack of blood.  Headshots lack impact due to it, injuries sustained during the climax failed to register with me thanks to not having that indicator and sequences where both McClanes cough up blood are awkwardly and poorly cut out to keep that 12a rating.  Not having any blood anywhere (except for a split-second at the villain’s demise, which is really jarring) makes the whole film feel toothless and exacerbates the lack-of-stakes problem.  It feels like a videogame, and a really bad one at that.

And yet, I really don’t think that this movie would have been better if it kept the blood and swearing and stuck to the initial 15 rating.  That’s how bad this action movie is; blood and swearing would not have improved the experience.  In any case, this movie really should not have been rated 12a in its current form, anyway, in my opinion.  That’s how hard it pushes its rating.  All you really need is the blood and McClane’s catchphrase and you have the original movie.  Those are my two cents, for what they’re worth.