On the 27th and the 28th of September 2013, Callie Petch attended the Eurogamer Expo with the intention of playing as many games and attending as many panels as they could stand standing in lines for.  The following posts chronicle their adventures…

Batman: Arkham City is one of my favourite games of all-time, all the more so because I didn’t see the quality of it coming.  Oh, yeah, I played Batman: Arkham Asylum like everyone else but, unlike everyone else, I found it to merely be pretty good.  Sure, the combat system was fantastic and the stealth mechanics were top notch and everything involving Scarecrow was amazing, but it felt a bit too aimless when it came to the story and navigating the linear open world was kind of a pain and, mainly, it just didn’t ‘wow’ me as hard as it did everyone else.  I was playing a not-crap Batman game, which in and of itself was a major achievement, but I felt that we could be having better and that developers Rocksteady (veterans of the little-remembered Urban Chaos: Riot Response) were capable of better.

And it was upon such sentiments that Rocksteady went away and came back with Arkham City barely two years later, blowing everything away in the process.  The already fantastic combat got even better with more enemy types and more available moves and contextual animations without once ruining the simplicity of it all, the stealth segments received a similar treatment making the act of stalking a room full of jumpy convicts even more fun, navigation was finally as fun as the rest of the game thanks to the addition of dives and the Batclaw-boost, and the story!  Oh, man, the story!  Everything about the game worked perfectly and it even found time to go more obscure with its fandom and source material nods, have collectables that were worth collecting (all future audio logs in videogames must be in the format of interviews conducted by Hugo Strange) and side missions that were worth completing, and just more ‘wow’s per minute than any other game in 2011 provided me (yes, even surpassing Saints Row The Third).  It was that rare licensed game that transcended such a tag to just being an absolutely incredible game in its own right with the only real knock against it – Catwoman, 10% of the single-player campaign, being locked behind an Online Pass – being a publisher mandate.  It’s a tough act to follow…

So, wisely, Rocksteady aren’t even trying; instead holed up working on something secret (please not something Batman related, please not something Batman related).  But, Warner Bros. Games caught wind of just how much everyone loved Arkham City and just how much money Arkham City made, so they went ahead and made a prequel (because, seriously, why would you even attempt to follow Arkham City) in-house anyway.  Batman: Arkham Origins, as the title suggests, takes place prior to the creation of Arkham Asylum but retains everything you loved about Arkham City.  And I mean everything.  Seriously, very little here has changed; developers Warner Bros. Games Montreal have adopted an “if it ain’t broke, don’t fix it” approach and what changes they have made are small and don’t upset the mould that Arkham City left.  Honestly, I’m not complaining at this in the slightest because no other game has yet to do Arkham City’s mechanics better than Arkham City.

So, what has changed?  That seems like a good question that can keep me from spending the next three or four paragraphs just going over what made Arkham City great again.  The biggest changes that the demo I played showed off (a very meaty 15 to 20 minute demo that allowed me to touch pretty much every campaign feature) came from the crime scene investigation segments.  In prior games, these pretty much meant that you stood in a pre-determined area and looked for the tiny specified object that the game wanted you to find, before scanning said object and having the game then just do all of the rest of the work for you.  Understandable in a narrative sense because you’re Batman, but it did lead to a half-baked gameplay feature, nonetheless.  Arkham Origins adds to this mode so that it requires a little actual detective work.

In the demo, and on the way to a hotel building to confront Black Mask, Batman is confronted by a police helicopter that ends up mysteriously crashing right in front of him.  At this point, a side mission pops up (much like in Arkham City) which tasks you with finding out what happened.  Now, initially, said detecting did just involve hunting for the pre-determined spot in the area and scanning, but then the game tasked me with figuring out the trajectory of the bullet that shot off the heli’s rotor.  In order to do this, the game reconstructed the crime scene in Detective Vision (a process that looked insanely cool) and then told me to cycle through the crime, like on a VCR, in order to figure out where the bullet came from.  Once I got in the vicinity of the section of the clip, the game automatically dotted a line to where it came from and the case was closed in terms of how far the demo would let me go, but it was still required more work than usual in these situations and I appreciate any attempt to make the crime scene segments have some semblance of depth.

The only other changes that I could notice came in the combat.  Don’t worry, the actual mechanics of fighting haven’t changed one bit (excepting the fact that you now get additional post-combat XP bonuses based on how difficult the game perceived the encounter would be for you going in, said bonuses getting larger the more difficult your odds), but there are two new enemy types.  There’s the armoured lieutenant, who is basically a replacement for the Titan heavies from prior Arkham games in that he has the same attacks and goes down roughly the same way, and combat specialists, who will counter your strikes unless you counter their counter.  They don’t add or detract much from the experience of fighting (especially in the case of the armoured lieutenant seeing as he’s pretty much just a palette swap), though, so you shouldn’t get your hopes up for anything that will alter the way you play the game if you’re coming in from Arkham City. 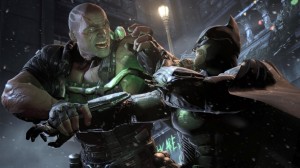 That sort of thing extends to most of the rest of Arkham Origins.  Traversing around the environment hasn’t changed but is still crazy fun, Predator segments haven’t changed but are still gleefully sadistic fun (especially since the Batclaw now comes with an ability to string up a limited number of enemies to various vantage-points in the map), combat hasn’t changed but it’s still the best in the business so why would you really?  Even the Joker’s voice hasn’t changed, with Troy Baker’s impression of the seminal Mark Hamill being so close to spot-on you may not even notice that the Joker’s voice actor had changed if no-one told you.  It’s graphically weaker than Arkham City with surprisingly blurry textures at many points, and Roger Craig Smith’s Batman voice is gruffer than Kevin Conroy’s (but nowhere near the level of Christian “I prepared for this role by gargling eight trucks worth of cement” Bale), but that’s about it.

Warner Bros. Games Montreal have chosen not to mess with the formula for Batman: Arkham Origins, opting for a game that’s basically going to feel more like a 20-hour mission pack with a new story than an all-new game.  I’m not going to complain about this, but I know that quite a few are going to be disappointed by the move and lament Origins as a missed opportunity to try something new.  I instead find it a testament to just how strong the Arkham Asylum mechanics that Rocksteady built are.  That even now, five years on from Asylum, those mechanics have yet to feel stale, old or in need of an overhaul speaks volumes to just how damn good they really are.  So, with that said, why would you want to risk messing with that formula?  “If it ain’t broke…” exists for a reason, after all.

Sticking with Batman: Arkham Origins for the closing of this entry in my Eurogamer escapades, Warner Bros. Games also brought the handheld exclusive Batman: Arkham Origins Blackgate along for us attendees to test out and the results were surprisingly strong.  A direct sequel to Arkham Origins (yes, we’re going down this road), Blackgate is essentially a Batman: Arkham game squeezed into 2.5 Dimensions with pretty much every non-traversal aspect from the main series brought into this.  That means that all fights take place with the Freeflow combat system, the scanning segments still require Detective Vision (activated by tapping the Vita or 3DS screen) and the stealth segments still take place using the Predator system.

Of these, the combat system, unsurprisingly, makes the transition the best.  After all, that’s what happens when you adapt the best fighting system in the biz today.  Variety in moves is obviously trimmed down to cope with the limitations of the handheld systems’ control schemes, but the principles remain the same, requiring you to keep the flow going by successfully anticipating what your enemies are going to do and acting accordingly in order to keep your combo up.  Blackgate even invoked an actual combat boss battle (a franchise first?) at the end of the demo without having to compromise the system’s mechanics to do so – which, yeah, made the fight against Catwoman really simple but, again, you’re Batman.  Excellent work there from developer Armature Studio.

Less successful in the transition, however, is the stealth.  Hampered by the 2.5 Dimensions, leaving limited room for manoeuvre without accidentally being spotted, and clunky movement controls, that caused me to accidentally walk in front of an enemy when I just wanted to do a stealth takedown on more than one occasion, I barely made it through the section by the skin of my teeth.  Unlike when I stumble my way through a difficult stealth segment in a console Arkham game, I can’t blame my poor decision-making or timing or risk-taking.  Everything that went wrong in the stealth section of Blackgate was purely down to shoddy controls and poorly implemented mechanics, which is a shame.

Still, I commend Armature for trying to squeeze a full Arkham experience down to a handheld, even bringing along some decent graphics and motion-comic cutscenes to boot, and assuming that the stealth mechanics have been tidied up between whenever this demo was coded and the game’s release at the end of the month, it could be a very nice companion piece to the main game.  I went into Blackgate with basically no expectations; only expecting a brainless brawler, due to the handheld connotation.  They tried something other than the easy way out, though, and that’s highly commendable.  Something to keep an eye on, then, when the game launches alongside Arkham Origins at the end of the month.  If only the stealth mechanics weren’t currently garbage; then I’d be recommending this unreservedly.

The Expo adventures will continue in further blog posts every weekday between Monday and Thursday until Callie Petch has ran out of articles here on GameSparked!

Callie Petch is kinda over getting told to throw his hands up in the air, so there.