During the second season of The Legend of Korra, Mike Mazzacane and I teamed up together to provide weekly recaps of the season for Screened.  These posts contain my half of each entry.

Lots to unpack, little time to do it in.  We only have three weeks left of the season (the final four episodes are being doubled up because reasons) and all of the pieces are now on the table, if not particularly coming together.  Therefore, I’m going to run through the various completely separate aspects of “The Guide” in various completely separate sections, cos that’s fitting and stuff, from thing I liked the least to thing I liked the most.

Unalaq And The Untwist: Oh, hey, Unalaq has been working with Vaatu all along.  Who didn’t see that coming?  Of course, whether he’s doing this of his own free will because he is totally evil and stuff or whether Vaatu is tricking him in much the same way that he tricked Wan is still in question, but a realisation hit me this week.  I really don’t care for Unalaq as a villain.  Seriously, he has no charisma, no interesting origin and doesn’t do many evil acts that I can admire.  Varrick uses his power and influence to frame Mako, Vaatu manipulates people into helping him bring forth the Apocalypse, Unalaq throws water at a force-field and is a sh*tty dad.  One of these is not like the others.  I’m worried that, when the Harmonic Convergence does arrive, he’s going to end up properly possessed by Vaatu for our giant Avatar smack-down when, clearly, it should be Varrick because that guy’s a villain!  Unalaq is to being a villain what Book 1 Mako was to being an interesting character.

“Don’t turn your head, don’t look away and don’t blink.”: So you know when somebody points out something bad in a piece of work that you’ve otherwise been enjoying but hadn’t noticed yourself, and you wonder why on earth they’re getting so hung up on it, but then you watch the next episode and you realise what they’re complaining about and you can’t stop noticing it no matter how hard you try?  That’s my story with the animation quality of Book 2 of The Legend of Korra.  For the first half of this season, I hadn’t really noticed much of a change.  I’d switched to watching episodes in standard definition on my laptop, so I put down any claims of lower quality to my change in viewing station.  “Beginnings”, as you all know, looked phenomenal, even on my crappy laptop.  Consequently, I decided to actually pay attention to the animation in the lower-key moments of this week’s episode to see if the difference in studios was particularly noticeable (and to improve myself as a critic, incidentally).

Oh, yeah, it is majorly noticeable.  Studio Pierrot (who were responsible for the Bleach anime and have been the main animation company for this season) can get the bigger moments looking great, like when Korra successfully pacifies the Dark Spirits or when Korra and Jinora enter the Spirit World, but the scenes between the more dramatic moments are very cheap-looking, a phrase I would never have tagged with Book 1.  Conversations are held with mostly static cameras and characters staring straight ahead, never blinking, mouths frequently just flapping wildly and the rest of the face often not moving at all, just the mouth.  Not only does it look cheap, it means that many of the characters look off-model and slightly creepy.  Look at the shots of Korra during her post-pacification conversation with Tenzin and notice how her face seems to be out-of-place on her head, like her eyes are about 3mm away from just being stuck in thin air, for example.

It especially sticks out because last week’s Studio Mir-led two-parter looked gorgeous with no expense spared anywhere.  In “Beginnings”, characters blinked, backgrounds didn’t look so muddy, conversations were presented with the same kind of dynamism that the action sequences have.  I’m not sure why Studio Mir have taken the majority of this season off (though, if I were to hazard a guess, that fourth season of The Boondocks, which they’re animating solely and premieres in January, may have caused them to shift their workload around), but this is a show that’s badly missing their presence.  I never realised how much the animation was needed to sell this show until everybody on the Internet pointed it out.  Thanks for ruining Korra for me, Internet!

“Forget it, Mako. It’s Republic City”: A lot of people have given this season a lot of stick for supposedly sub-par writing, and I can kind of see where they’re coming from because everything I love about this plotline is having to be done by making every single person except Mako and Varrick a total idiot who seem to have gained amnesia towards last season’s events.  When Asami was trying to defend Varrick to Mako, I was really hoping that there’d be a moment where she stops midway through her defence, realises what she’s saying and starts believing him, but, nope!  Lin Beifong will investigate anonymous tips but not the theories and evidence presented by Mako, the guy who helped bring down the Equalist movement some six months ago (which, incidentally, means that my theory that Lin’s being purposefully ignorant of Mako in order to hunt out corrupt cops in her department has been thrown out the window at this point).  Bolin continues to remain a walking punch-line instead of anything that resembles the Bolin we all fell in love with in Season 1…

Yet, I am almost willing to forgive all of that purely because Mako’s character is improving so much and Varrick is such a fantastic villain!  That sequence where he gets his goons to essentially drag Mako to a dark and imposing room for a conversation that starts as we’ve pretty much always seen Varrick so far, goofy and light-hearted, but then slowly turns more sinister as he makes very subtle threats towards the safety of Bolin and Asami!  Ooh!  John Michael Higgins, with credit to the episode’s writer, Joshua Hamilton, in the space of one scene, has managed to turn the season’s comic relief into its single most imposing character.  Mako has benefitted greatly from having a villain he can’t punch in the face and getting material that doesn’t involve having to deal with girls who just can’t seem to keep their motors from running whenever he’s in their presence, to having to develop a personality beyond “brooding”.  If this plot didn’t require everybody else to be complete frakkin’ morons, I would hold it up as the show’s highpoint, so far.  Alas… 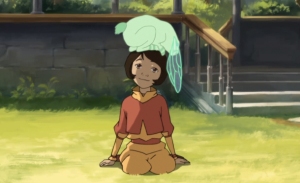 Korra & Jinora Go Through A Portal-a: Even with the groan-inducing Act 1 break (not for the revelation that Tenzin has never actually been to the Spirit World, more for the way it was played so extremely, like a parody), this was the best plot of the night for a multitude of reasons.  The first is that we get our first glimpse at the newer, better Korra.  Obviously, the amnesia and subsequent connection with Avatar Wan was to get her to stop being so hot-headed and self-centred, but it also ran the risk of possibly changing her character into something unrecognisable from the Korra we’ve grown to know.  Fortunately, this doesn’t seem to be the case.  She’s still the Korra we know, blunt, a little impatient and always the first to rush into danger to protect others, but she’s noticeably calmer and more understanding.  When she tells Tenzin “we’re running out of time”, she doesn’t shout or bark the words in frustration, she’s merely trying to gently break to him that what he’s doing isn’t working.  Korra still has a ways to go, but she’s getting better at the whole “being a better person” thing, especially helped by any sequence she shares with the kids this episode.

Tenzin, meanwhile, has to deal with the fact that, no matter how hard tries, he cannot enter the Spirit World.  An act that he has spent all of his life training for, studying about and being groomed by his dad to be able to do, but he can’t and the inability to be able to do so, coupled with his fear of failing to live up to the expectations of his long-departed father, causes him to lash out at others for his failings.  It works on an in-show level, Tenzin seems to hold himself in higher esteem than his siblings for never truly disappointing his dad whilst he was alive, but also on a level for the viewers.  We’ve all been there at some point or another, that time when we finally learn that our parents lied when they told us that we could do anything if we wanted it hard enough.  The world simply doesn’t work that way, but we’d been led to believe otherwise and so, possibly for fear of letting down our parents, we lash out and blame others for our failings and become resoundingly bitter about our supposed incompetence.  By episode’s end, Tenzin seems to have reluctantly accepted that Jinora can do what he cannot, but I won’t be surprised if we pick this back up again next week.

(Incidentally, I’d also like to praise the Jinora stuff, too, but I’ve sailed way past my word count limit, here, so I’d better wrap this up.)

At this point in Book 1 of Korra, the show was building up an unstoppable head of momentum, tossing out episodes of A- and A grade quality like a lonely old spinster tosses out birdseed to the pigeons.  Book 2, by contrast, is continually more stopping and starting, yet to get a consistent “this is where we’re going and it’s going to be AWESOME” feeling for more than two episodes at a time.  Maybe it’s my interaction with the Internet as the season has gone on, maybe the two week break between the last set of episodes has caused some reflection on the season as a whole, maybe “Beginnings” highlighted the giant gap in quality between it and the rest of the season or maybe this season really has just been all over the map, but Book 2 of Korra has been a highly uneven affair so far and “The Guide” basically encapsulated the best and worst of the season in one 23 minute chunk.  I’m really hoping that these closing five episodes start busting out the A-grade stuff, because I want this season to close strong.  Here’s hoping…

Callie Petch has gotta know, can we work it out?