It’s a definite step down from their big comeback, but Muppets Most Wanted is still a lot of super happy fun.

Muppets Most Wanted opens with a musical number where Kermit and Fozzie sheepishly admit that “everybody knows the sequel’s never quite as good”.  It could be taken as a pre-emptive apology on the behalf of everyone involved; an admission that everyone knows that they will not recapture the lightning that 2011’s The Muppets so effortlessly bottled and a warning to tone down your expectations.  Admittedly, I found this self-deprecatory plea rather humorous seeing as it was paired with a song that I thought was better than any of the ones The Muppets cooked up (yeah I said it, I have a soft spot for knees-up sing-a-long show tunes, and I will gladly fight you over this), but they’re not wrong to give you the heads up as, no, Most Wanted is nowhere near as good as The Muppets.

Then again, it’s not exactly trying to be.  See, 2011’s The Muppets was, for all intents and purposes, a fan film.  A fan film written, directed, starring and scored by fans as a love letter to the Muppets themselves.  It was a labour of love and it wore that and its heart on its sleeves, it was sentimental and nostalgic and was counting on you feeling the same way so that, when Rainbow Connection finally appeared, you too would be bawling your eyes out.  Most Wanted does not have such ambitions.  Most Wanted doesn’t want to make you get all nostalgically teary-eyed, it just wants you to laugh.  It wants you to laugh and laugh and laugh so loudly that the sheer volume of your laughter causes distressed family members to look at you suspiciously.  Because of this, it was never going to be as good as The Muppets, in much the same way that The Great Muppet Caper was never going to be as good as The Muppet Movie.  And that’s fine, because laugh I did.  A hell of a lot.  To the point where I left the cinema with a jolly little skip instead of just going “Yeah, that was not quite as good as the last one.”  I liked it on its own merits, for what it was because it is damn good at what it does.

The set-up for the jokes, then.  Shortly after the conclusion of The Muppets, the Muppets are tapped by a big-shot tour manager named Dominic Badguy (Ricky Gervais at his smarmy best) to go on a world tour of their show so that they can capitalise on their return to fame whilst they still have it.  What the Muppets don’t know, though, is that Dominic is in league with an escaped master criminal named Constantine who is a dead ringer for Kermit, save for the mole on the former’s face, and that the pair are planning on using the tour as a cover to steal various elements that would help them steal the crown jewels.  With Kermit being shanghaied off to a Russian Gulag under the strict watch of secret Kermit super-fan Nadia (Tina Fey), Constantine takes his place as the leader of the Muppets and his laissez-faire attitude to his cover allows the rest of the gang a degree of creative control that it be better they didn’t have.  And not helping matters are the Interpol (Ty Burrell) and CIA (Sam the Eagle) agents on their tail after the heists start causing too much noise. 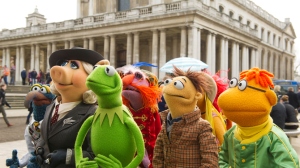 It’s a farce, basically.  A good old-fashioned farce where the stakes are relatively low, the mood is nice and light and breezy and features a plot where everything could have been solved in five seconds if any of the characters involved had their brains switched on that day.  Like I previously mentioned, there’s little emotional depth going on here, the sole exception being Miss Piggy’s continued attempts to finally get Kermit to put a ring on her finger, which makes things much more easily disposable.  Do not expect to be moved and, honestly, don’t fully expect to still be thinking about it about a week or so removed from seeing it.  Again, this is not the film’s intention.

And that would be a legitimate problem if it weren’t for the fact that Muppets Most Wanted is absolutely hilarious.  It can’t quite sustain its manic pacing for its near-two-hour runtime (I honestly feel like it could have trimmed a good 10 minutes and ended up with a wall-to-wall hysterical 95 minutes), but it comes damn near close.  Nearly everything that Constantine says in his awful-Russian Kermit impersonation (that at times seems to inadvertently slip into Transylvanian but only adds to the effect) is comic gold, especially his butchering of classic Kermit phrases.  Nadia’s simultaneously hard-assed and affable prison warden (she doesn’t even really try to stop Kermit’s escape attempts because she knows every single prison escape trick in the book, because she’s seen every prison break film ever made, yes, even the ones in space) is a near-perfect usage of Tina Fey.  The constantly bickering nature of agents Jean-Pierre and Sam the Eagle is priceless and equally as priceless are the running jabs at France’s… lackadaisical attitude to work breaks by having Jean-Pierre literally take a break every single time that something big happens in the case.  And as for the film’s best gag?  I won’t spoil it but, as a lifelong Muppet diehard, it was exactly the kind of reverential self-deprecatory gag that is capable of making me burst out into extreme laughter.

More importantly, though, it’s consistent.  This is not the kind of film that blows all of its best gags in the opening 30-odd minutes or revealed all of them in the trailers.  The giant laughs are infrequent but well-spaced out and linked with consistently chucklesome or chortle-worthy material (and I apologise for using the phrase “chortle-worthy” but it’s the best I could come up with for “laughing loudly material that’s not as laughing loudly-worthy as the film’s best jokes”) so I spent the majority of the film with a giant smile on my face.  It also helps that the human cast trio are almost equally happy to be here.  Nobody’s at Jason Segel-levels of “Oh, man, I COULD NOT BE MORE STOKED TO BE HERE!” because that is almost impossible, but everybody is game for whatever the script throws at them.  Ricky Gervais seems positively thrilled at getting asked to have his boss tap dance on his head during a song entirely designed to disparage his character’s role in the story; it’s his best performance in years.  And while most may think that Ty Burrell is the standout human actor, and they can be forgiven for thinking that (he is excellent as a cartoonish Swiss stereotype), those people will immediately realise just how wrong they are when Tina Fey pulls out a newspaper clipping of Kermit The Frog and starts snogging the lights out of it.  She’s pretty funny in this. 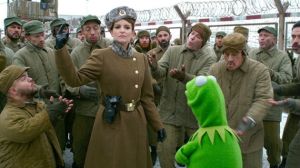 A brief note on the celebrity cameos.  Yes, there are a lot of them.  However, this is not a problem and everybody who is trying to insist otherwise is wrong for these reasons.  1] Celebrity cameos have always been inherent to the world and premise of The Muppets.  They’ve been there since nearly Day 1 and anybody who has a problem with them now is either not familiar with The Muppets or their nostalgia goggles happened to forget everything about the cameos.  2] They’re not just “Look at this A-lister we got for these five seconds!”  There will be just as many that go over your head as there will be that you recognise.  For every Lady Gaga, there’s a Tom Hollander, for every Christoph Waltz, there’s a Hornswoggle from the WWE.  3] There are no more cameos here than there were in The Muppets.  4] They never take the focus away from the Muppets themselves.  When Tom Hiddleston pops in for five seconds, that’s all he does.  He’s not stealing vital plot and screen time from the Muppets themselves.  In fact, this is probably one of the more Muppet-focussed Muppet movies, the attention is on them at nearly all times and I don’t think that there’s a scene in here that doesn’t feature a Muppet in some way, shape or form; news that will likely please Muppet purists.

And as for Walter, who basically led the last Muppet movie despite it supposedly being about the other Muppets themselves?  Well, and most likely for the better, he slides comfortably into the supporting Muppet cast as the closest thing the film gets to a straight man.  He fits the role well and he’s a nice part of the overall ensemble.  Speaking of that ensemble, it’s also mostly well handled.  Gonzo fans will likely be disappointed that, again, he’s pushed to the side-lines and only really gets a couple of really funny moments, but the Muppets are a large cast of characters and I think it’s to the film’s credit (or, at least, I’m pretty sure it is, it may also just be my fan nostalgia talking) that most of the cast get a defining line or action.  Most of the cast get the chance to do or say something extremely funny which is probably the best we can all hope for as, let’s face it, everybody has different Muppet preferences and no two people are going to be 100% satisfied with how the balance turns out in a Muppet film.

If there is one thing I can properly knock the film for, besides its slightly-too-long running time, though, it’s the occasional usage of CGI.  Now, I know that the merest mention of CGI will likely immediately send most Muppet diehards running for the Internet message boards to complain, but there is good news about this.  The most prominent usages of CGI come in Constantine’s prison break sequence and his first musical number, both of which are dealt with in the opening 30 minutes.  Afterwards, if there are a tonne of CGI-enhanced shots, I didn’t notice them.  The bad news, however, is that the CGI in those two sequences (and especially Constantine’s prison break) is awful.  It sticks out dreadfully, moves shoddily and cheaply and looks like it was done in about 15 minutes before a lunch break.  I wonder if that was the intention, quite frankly, because everything else in the film looks spectacular (these are master puppeteers at the helm, after all) and it only leaves such a sour taste because it’s one of the very first things you see after the opening musical number and you know what they say about first impressions. 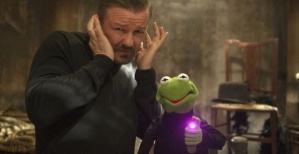 Still, two instances of dreadful CGI in the opening 30 minutes are not enough to distract from what Muppets Most Wanted is good at and that is making the viewer laugh something fierce.  It lacks the openly sentimental heartfelt-ness of The Muppets but it’s still top-quality entertainment.  And, in all honesty, if you can easily apply the phrase “it’s The Great Muppet Caper to the original’s The Muppet Movie” in regards to a film sequel, then it’s not exactly a comment that’s supposed to be taken as a knock against the film in question.  More film sequels should strive to that kind of level as a minimum baseline.  Muppets Most Wanted is huge fun, has great songs and I left with a big old smile on my face, what more of a recommendation do you need to go and see it?