I am going to be blunt, folks.  In a sports biopic about the first Indian athletes that are signed to an American Major League Baseball franchise, your main protagonist should not be The White Man.  See, despite that subject matter, Million Dollar Arm is not about the athletes; it’s about the sports agent who plucked them out of India and how their eventual success saved his agency.  Look, I, like any man, love Jon Hamm; I could stare at his ruggedly handsome looks and chiselled jaw for hours, as I in fact did, but he should not be the lead character of this movie.  J.B. Bernstein, his character, should be a secondary character instead.  The athletes and their translator, Rinku Singh (Suraj Sharma), Dinesh Patel (Madhur Mittal) and Amit Rohan (Pitobash Tripathy), should be the leads.  Hell, if you must make it about a sports agent, then why not make it about his Indian partner, Ash (an always nice to see Aasif Mandvi)?

But no, instead they’re side characters for absolutely no discernible reason.  Hell, I even hate to use that phrase because their characters basically amount to being J.B.’s MacGuffin for both his business and character arc, and repeating “thank you, Mr J.B. sir” over and over as if that somehow substitutes for actual character work.  I count about six scenes that are solely dedicated to them and nobody else, the rest of the time they are basically children for J.B. to babysit; his love interest (Lake Bell, hopefully just taking a paycheque) even makes that comparison openly and his treating-them-right is basically what convinces her to open her legs to him.  There could be a brilliant sports drama about their struggle to adapt to life outside of their small little Indian village, of their homesickness, of being stuck in an unfamiliar and rather uncaring country, and the immense pressure for them to perform here.  Hell, there should be, this film is two goddamn hours, there’s no excuse for them having absolutely no character of their own outside of their brief introductions. 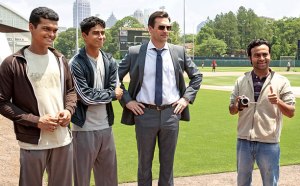 I know that I am supposed to review the movie we’ve got, not the one I want, but, dammit, this shit should not have happened!  Especially since this creative decision actually hampers the film we have totally, as well.  Not only are there no real dramatic stakes, seeing as the only thing we really know about these boys is that their success is important to The White Man and that makes it rather hard to care about how well they’re doing – it’s like when action films put a child in danger and they expect you to suddenly become really worried for the kid’s safety solely on the basis that it’s a kid, even though it has no character – it actually exposes the film as hypocritical.  J.B.’s character arc is that he learns to treat and see these kids as actual people instead of just walking contracts and deals, except that the film almost never portrays them as anything but walking contracts and deals for J.B. whose future rides on their success.  So if the film can’t be bothered to see them as people, then why are we the audience supposed to step in and do the film’s work for it?  Again, this film is two goddamn hours!  There is no excuse for this!

What’s worse is that if Rinku, Danesh and Amit were the lead characters, or at least had an equal amount of attention as J.B. gets, I’d be giving Million Dollar Arm a passing grade and maybe a light push to go and see it!  It’s a solidly made sports biopic.  It doesn’t bring anything new to the table (except an over-use of handheld cameras that all seem to have been operated by people desperate for a piss) and it’s too long, but it has good and charming performances, a nice light and warm mood, a pretty good soundtrack by A.R. Rahman, and a good grasp at the beats of the sports drama genre.  It’s nothing great, but it is comfort viewing and sometimes the cinematic equivalent of a nice slice of sponge-cake makes a good alternative to the relentlessly loud and cynical noise of everything else.

But they’re not and the fact that they’re not actually incenses me as I type these words.  I imagine that there will be some people out there who will think that I am getting all worked up over nothing and that, again, I should just give a passing grade to the film we’ve been given instead of a failing grade due to it not being the film I want.  Well, no.  I am not going to do that.  Not only does Million Dollar Arm blow the chance to say something interesting or do something new with its premise by not making the Indian athletes the leads, it reduces them to mere pawns and MacGuffins in The White Man’s personal journey, giving them no agency or character of their own and not seeming to care one bit about that fact.  I find that reprehensible and I refuse to let it off the hook for that.  This could have been avoided.  This could have oh so easily been avoided.  Instead, we’re here and Million Dollar Arm has nobody to blame but itself.