Although it’s lightweight and its effects are awful, Paddington gets by on charm, sweetness, some decent laughs, and a strong personality.

Paddington never looks quite right.  There are a few angles and distances where he looks appealing enough, although never quite as cute as the film would like for him to be seen as, but from pretty much everywhere else he looks… off.  His face creeps rather than enchants, his top half seems slightly more animated than his bottom half, his eyes frequently give off this unnerving thousand-yard stare, and any movement that requires some semblance of haste is covered up with several dozen slabs of motion blur to hide the jerkiness and general low-quality nature of his CG.

Paddington, relatedly, never looks quite right.  I’m not referring to the live-action stuff; that looks great – there’s a dynamism to proceedings and a real sense of visual splendour, a desire to impress and engage the eyes with surreal sets that still recognisably exist in our world.  I’m referring to the CG.  The copious amount of CG and, good lord, does it ever look awful.  Whether it be Paddington himself, or the jungles of Peru, or a flock of seagulls that terrorise any unsuspecting prey that holds sandwiches, or any flames whatsoever, none of the film’s vast amounts of CGI ever manages to convince.  This isn’t like in Darren Aronofsky’s Noah where the CG creatures are not supposed to fully convince, these are just incredibly low-quality CG effects and they almost serve to destroy the whole film. 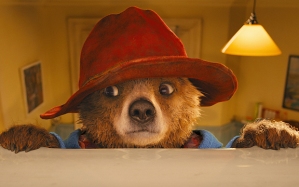 Their incredibly low-quality ends up catching the eye, demanding its attention and focus, and sticking in the brain for far longer than they’ve been on screen for.  They threaten to overtake the whole film, to direct attention away from the film they’re attached to and to simply be too ugly for events on screen.  Fortunately, miraculously even, they don’t end up sinking the film, despite being a large part of it.  Paddington instead manages to get by on sheer bloody charm.  It’s low-key, knows this, and therefore plays to those strengths.  This is a family film in the truest sense of the word, of the kind that they simply just don’t make anymore.

Our plot, then, follows Paddington (voiced by Ben Whishaw), a rare species of bear that resides in Darkest Peru and acts very human-like.  Years before, his kind had been discovered by an Explorer and Paddington’s Aunt and Uncle have nursed a desire to visit The Explorer in London ever since.  When an earthquake takes Paddington’s home and claims the life of his uncle, his Aunt sends him to live in London.  There he is taken in by the Brown family: consisting of the uptight safety-freak Mr. Brown (Hugh Bonneville), the charitable but out-of-touch Mrs. Brown (Sally Hawkins), the permanently-mortally-embarrassed daughter Judy Brown (Madeline Harris), and the daredevil and resourceful son Simon Brown (Samuel Joslin).  Paddington, however, is also now being hunted by an evil taxidermist (Nicole Kidman) who wishes to add him to the Natural History Museum.

The film goes pretty much as you’d expect from there.  Paddington has a hard time fitting into London life, the Browns slowly warm up to him and grow closer as a family as a result, the taxidermist is comically psychopathic and single-minded in her pursuit of Paddington…  It’s all very obvious, but in an earnest and likeable way.  The film is rarely mean-spirited – I mean, there’s the apparently-now-obligatory prison rape joke, but that’s about it – and has a lot of love for all of its cast.  Everything is light, everything is low-stakes, the villain’s punishment is really rather tame, the film’s one big chase scene only lasts about 5 or 6 streets, the pacing is calm and measured. 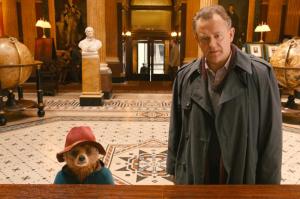 It reminds me very much of films like The Borrowers, or MouseHunt, or early Harry Potter – not coincidentally, Harry Potter producer David Heyman is a producer on this – that kind of gentile mid-90s/early-00s family film.  That same earnestness, that same joy, that same way of distorting our reality through extravagant and colourful sets that don’t always call attention to themselves.  Hiring Paul King, of The Mighty Boosh fame, to write and direct ends up being a clever choice.  He knows how to frame shots, how to make places like The Brown’s home feel recognisable and relatively attainable without losing a sense of wonder.  The Geographer’s Association headquarters, in particular, feels a hell of a lot like Gringotts in terms of scale, filming style and overall feel.

There’s a lot of charm, here.  A lot of charm and a full-on genuine personality bursting out from every corner of the frame.  Everything is silly, everything is fun, everything is clearly loving, everything is slightly different to what else is on the market right now.  There’s no real big action setpiece, a lack of pop culture references – aside from one blatant and wholly unnecessary call-out to the bit in Mission: Impossible: Ghost Protocol where Tom Cruise climbs the Burj Khalifa – and there’s a real care in the visual presentation of the film.  Shot compositions and camerawork are very deliberate, very staged to heighten the unreality of the events in our very real world.  There’s also a very nice recurring dollhouse visual with the family members that I want to call attention to but can’t find any way to smoothly integrate into this paragraph.

The film does occasionally tease touching on or tackling important and weighty themes – immigration, environmentalism, our broken economic system that forces those of us without access to fall-back resources to have to live on the street in a constant state of judgement with no help – but Paddington backs away from these subjects just as soon as they’re brought up; their appearance coming built into the source material and story rather than from, any conscious effort.  Instead, the film concerns itself with messages of acceptance, tolerance, and loving one’s family – y’know, obvious stuff that every other family film ever has used as their thematic backbone.  Again, though, it works because the film is so damn earnest and charming.  It knows what it wants to be and it’s proud of that fact.

That, ultimately, is why Paddington gets a pass from me: charm and personality.  Its laughs are minor but relatively constant, its heart is proudly displayed on its sleeve, and it is very good at being the nice lightweight trifle of a film that it aims to be.  If it had a few more big laughs and if its CG effects weren’t so utterly abysmal – inexcusable for a film that cost between $50 million and $55 million – then I’d be offering a full-blown praising, similar as I did to The Love Punch back in April.  As it stands though, and especially considering how much I expected it to suck prior to the film rolling in front of my eyeballs, Paddington is a charming delight that’s worth a look.

Callie Petch is ready to show themselves to you.