Kingsman: The Secret Service is not particularly intelligent, mature or able to fully escape the shadow of a certain other Matthew Vaughn film, but it is a hell of a lot of fun.

Matthew Vaughn is now one of the best action directors working today.  That feels really weird to type, but it’s honestly true by this point.  The guy who got his start producing Guy Ritchie crime films and directing Layer Cake is now one of the best action movie directors working today.  It all, however, becomes more than clear when one actually watches Kingsman: The Secret Service.  In stark contrast to the typical way of shooting action films, Vaughn doesn’t shake the camera around like a drunkard who is sobering up, he doesn’t keep it tightly zoomed in on the characters in a misguided attempt to make the viewer feel like they’re there, and he doesn’t rapidly cut between sixteen different shots to mask any violence in incomprehensibility.

Instead, Kingsman is fond of actually showing you stuff.  He prefers longer takes with slightly steadier cameras, although they do shake, that keep enough distance from the people that it’s filming without losing the impact of the various hits.  In addition, Vaughn is a man of style, flinging himself into the comic book world of Mark Millar and Dave Gibbons’ source material with gleeful abandon.  Choreography is wild and exaggerated – many unnecessary flips, highly impractical moves, and operating on rule of cool more than anything else – and he plays with speed to great effect.  There are instances of the obvious Zack Snyder super-slo-mo-then-speed-up-then-slow-down-again school of filmmaking, but most of the time things are more subtle, employing brief doses of hyper-speed to enhance the kineticism of the fight scenes as well as purposefully jarring usages of CG’d environments and stitched together shots. 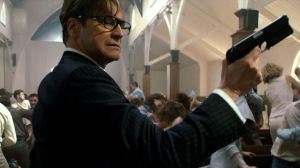 This all ends up creating action scenes that feel very reminiscent of the Lucas Lee fight from Scott Pilgrim vs. The World and the entirety of The World’s End, like Matthew Vaughn saw what Edgar Wright was doing and, instead of merely taking notes, lifted pretty much the whole aesthetic for himself.  It really, really works, though.  When Kingsman does get into its action scenes, they end up being a tonne of glorious fun.  Much like when he directed Kick-Ass, Vaughn displays a gleeful rather teenage enthusiasm for action sequences, prioritising fun and coolness over logic, reality and good taste.  In its standout sequence, Vaughn ends up crafting an utterly ridiculous brawl that starts off feeling like slightly uncomfortable wish-fulfilment bad taste, but becomes so gloriously deranged – aided by a perfect music cue – and so impeccably staged and shot that I ended up revelling with the film in its excessive line-crossing mayhem.  It’s the kind of action scene that films don’t have the balls to make nowadays.

That’s what Kingsman has going for it.  Pure glorious debauched fun, where you can also actually make out what’s going on, which is an incredibly nice change of pace from humourless incomprehensible dreck like Taken 3, The Equalizer and their ilk.  I mean, it’s not the only thing going for it, but it is the main thing going for it and the thing that powers it through most of its problems.  Vaughn’s direction is always pacey and stylish, the performances are all excellent – in particular, relative newcomer Taron Egerton really nails lead character Eggsy’s innate goodness without losing sight of the fact that he’s a mischievous young adult, whilst Colin Firth legitimately (and surprisingly) impresses as a halfway convincing action movie star – and there are many legitimate belly-laughs to be found within.

This all being said, Kingsman does have many problems.  For one, at two hours and change, it is too long and that sustained energy eventually starts feeling a bit tiring at many points where the film isn’t going full-tilt.  For two, whilst I do give the film points for a female lead character, in the shape of competing Kingsman candidate Roxy (Sophie Cookson), I do take those points back for the film not really giving her much to do, despite making a big deal out of her existence.  This is actually a problem with the film overall, lots of time is spent on certain characters and plotlines – the main ones involving chav Eggsy beings groomed by Colin Firth’s Harry Hart to become the latest Kingsman, a member of an elite and highly secretive spy organisation, whilst tech billionaire Richmond Valentine (a lisping Samuel L. Jackson) puts into play an evil plan that threatens the world – and that split can, at times, leave the film feeling unfocussed and underdeveloped in parts. 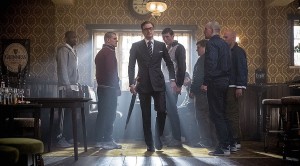 More of an issue than those, though, is the simple fact that Kingsman is not Kick-Ass.  And I’m not just saying that because it’s the same people who made Kick-Ass the film (Matthew Vaughn and Jane Goldman) adapting work by the same people who made Kick-Ass the comic (Mark Millar and Dave Gibbons).  Kingsman has that same anarchic tone, that same gleeful desire to revel in immaturity, that same stylish nature, the same attempt at melding action and comedy, that same irritating self-conscious insistence on having characters refer to the type of movie the film is trying to be in-dialogue, that same shock death of [REDACTED] at the two-thirds mark…  I think you see what the problem is.

Kingsman ends up hitting a lot of Kick-Ass’ beats only without the surprise impact that Kick-Ass had back in 2010.  It’s also kinda just a lesser movie in general.  It’s nowhere near as funny, most of its cast isn’t as developed, its pace over the runtime isn’t as well managed, and I rarely found it as giddy and grin-inducingly brilliant as I found, and still find, Kick-Ass to be.  It feels less vital, less like a shot in my movie-going arm, and less brilliant than that film, basically.  When it’s going full-tilt, pushing itself well past the typical limits of immaturity and backing utterly ridiculous extended displays of violence in sync to “Pomp And Circumstance”, that lower-quality Xerox feeling rescinds completely and the film is a delight to watch.  When it slows down from that, though, my personal being was filled equally with enjoyment for what I was watching but also a desire to just watch Kick-Ass again.

That all being said, Kingsman: The Secret Service is still a delight and a far better film than its last minute delay and eventual January release date would have you believe.  In its lesser moments, it’s a less-great version of Kick-Ass.  In the moments when it’s on fire, and those do eventually come and my word are they glorious, it sets a high bar for the rest of 2015’s action films to clear.  Superbly directed, very well acted, and a great deal of fun, Kingsman is very much a delight that, although it never overcomes the shadow of Kick-Ass, is another excellent entry into the filmography of Matthew Vaughn: one of the best action movie directors working today.

Kingsman: The Secret Service will be released in UK cinemas on January 29th, and in US cinemas on February 13th.

Callie Petch is as free as a bird now.