Vacation gives precisely zero reasons for existing, let alone as to why you should watch it over the original.

National Lampoon’s Vacation opens by rolling its credits, and classic Lindsey Buckingham song, over a montage of picturesque postcards of America.  Vacation opens by rolling its credits, with that classic Lindsey Buckingham song returning, over a montage of specifically cropped images of generic American vacation photos that are eventually revealed, once the cropping is taken away, to be a whole load of embarrassing situations.  Both of these end up perfectly setting up the films that they are kicking off.  National Lampoon’s opening, purely by just showing enough of these often condescending postcards one after another, informs you that you are about to watch a vicious satire, where almost all of its jokes are used to further that satire.  Vacation’s opening informs you that you’re about to watch 99 minutes of “ooh this looks like a nice thing wait no it’s not” with no change, alteration or further point.

See, the original Vacation is a comedy classic for many reasons – its dark line-crossing humour, smart writing, a top-of-his-game 1983 Chevy Chase – but the main reason why it holds up is because it’s a film with a point.  Yes, the film does mainly run on “ooh this looks like a nice thing wait no it’s not”, but there’s a point to it besides just being humorously mean-spirited, specifically a blisteringly vicious takedown of the White Upper Class Nuclear Family in the 1980s.  Their complete obliviousness, and occasional contempt, to anyone outside of their privileged bubble is what drives much of the humour because, and here’s the dirty little secret, they deserve it.  The Griswolds are horrible people, with Dad Clark and his forceful passive-aggressive (and later just full-on aggressive) “Father knows best” schtick being the worst of them all, and their ignorance and entitlement due to their class and race is why their every setback and every failure and every embarrassment is funny, because they deserve it. 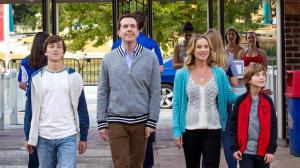 The new Vacation, by contrast, is just 100 minutes of “ooh this looks like a nice thing wait no it’s not”.  Much of the satire has been stripped out completely, instead replaced with a softening sentimentality towards its main cast that ends up making Vacation feel like almost any other New Line comedy released in the last five years.  Hell, the trip itself comes from Rusty (Ed Helms) realising that his wife Debbie (Christina Applegate) is growing tired with the same old routine vacation to a cabin in Michigan and decides to shake things up by taking his family, including his sensitive teenager son James (Skyler Gisondo) and his monstrous younger son Kevin (Steele Stebbins), to Wally World instead.  In theory, that could be a set-up for Rusty to force his family to relive one of the defining events of his life out of inadvertent selfishness, but in reality it’s just him trying his best to shake up the monotony of his family’s current life and bring his two sons closer together.

That kind of empathy and sentimentality appears throughout the new Vacation and it honestly kind of kills the whole film.  When the Griswolds of the original Vacation closed the film closer together, that came from them all retreating further into their entitled privilege bubble, since none of them truly object to Clark taking a kind hostage who was just doing his job whilst they prance about Wally World, which is entirely befitting the dark mean-spirited nature of the film.  When the Griswolds of this Vacation close the film closer together, it comes from them having survived a hellish trip together and taking out their frustrations on people who are much bigger arseholes than themselves and are completely deserving of a beat-down by the newly united Griswolds.  It feels like a cop-out, ripping the film of any of the venom or bite that the original had and leaving it without much of a point.

There’s no particular target in any of the jokes, basically.  It just ends up as bad things happening to fundamentally decent people.  The exception being Kevin, the youngest sibling of the new Griswolds, who is a monster for no other reason than the very wrong assumption that a younger brother viciously bullying his older brother is inherently funny.  Terrible young kids is a very hard trick to pull off in comedies, because if you overdo it and/or your actor/actress isn’t good enough then you just end up with a character that nobody wants to spend any time with, which is the case here.  Kevin is a complete monster, including multiple times where he nearly kills his older brother by strangling him with a plastic bag, and there’s no particular reason for why he’s so terrible and bullies James so relentlessly.  Somebody just thought that a kid bluntly saying stuff to the effect of “James is such a f*cking sh*t I wish he would die” was funny, so here it is.

That kind of “funny stuff for supposedly funny’s sake” is what powers the whole film.  Whilst there are some funny moments – involving a trip to see Chris Hemsworth because then the film actually has a target and reason for its jokes, although it does nothing with the constantly repeated set-up that he’s a conservative presumably because nobody wanted Hemsworth to say sexist or homophobic things, whilst a visit to the Four Corners monument offers up the film’s biggest laughs – most of it is just jokes without a point.  Why does a white water rafting sequence lead to Charlie Day trying to murder the Griswolds after he gets dumped?  Why does the car’s GPS get stuck on Korean and spend the rest of the movie shouting our location cards at us?  Why do they get conned out of their stuff when looking for a back entrance to a Hot Springs?  The answers to all of these are basically just “cos it’s funny”.

Now that would be fine if A) much of this was funny, and it mostly isn’t although there are still some funny moments to be found.  More of a problem though is B) it is explicitly a remake/sequel to a comedy classic that didn’t need either of those things, or any more of those in the cases of a sequel.  As Rusty is busy breaking the news to his family that they’re off on this road trip, they all engage in an extended meta dialogue about whether anybody remembers the original Vacation and that, irrespective of its legacy, the new one will stand the test of time on its own.  It’s not particularly funny, and it’s another example of writers not getting that the Jump Street movies get away with this stuff because that meta-acknowledgement of the redundancy of their own existences is the whole point of them, but, more importantly, it then forces the original Vacation back into one’s brain, keeping the new one from being able to stand on its own two legs.

And it won’t stop forcing it back into your memory, like it’s terrified of being evaluated on its own terms because it knows that everybody will realise that there’s no point to any of this.  So it constantly drops references to the original and outright reuses gags to call attention to the fact that it’s a Vacation movie, in the hopes that people will think that it has a reason for existing.  There’s even a restaging of the Ferrari gag from the original, only shortened significantly and with a much meaner payoff for seemingly no reason.  And that’s basically Vacation in a nutshell: a pointless movie that fails to justify any part of its existence, not as a Vacation movie and certainly not as a film in its own right.  Yes, admittedly, it did draw a few laughs from me, but nowhere near enough to justify the 100 minutes of my life that I spent watching it.  What a waste.

Callie Petch found out long ago.