Although The Scorch Trials almost gets by on thrills alone, they can’t hide the fact that the film is completely empty.

We are now 4 hours and 20-odd minutes into The Maze Runner series and, so far, nothing much has really happened.  I mean, “stuff” has happened, lots of “stuff” has happened, but “stuff” is nebulous, brief, and completely devoid of substance.  So, whilst “stuff” has been going on, things like “character work” and “plot” and “thematic points” have been left by the wayside, like a first-time fan-fiction writer who doesn’t actually understand how a good story is pulled off.  Except, in this instance, what we’re watching seems to be a fan-fiction version of the novels that the films are based off of.

I took a cursory glance at the Wikipedia plot summary for The Scorch Trials Novel Version before penning this review and it bears almost zero resemblance to the film I watched.  This is not an exaggeration, at least according to that summary (because I haven’t read the books), The Scorch Trials Movie Version has basically nothing to do with the book that it is based on.  In a way, this is a blessing because, good lord, the book sounds like an absolutely dreadful mess.  On the other hand, though, it’s a curse because that leaves The Scorch Trials with nothing really powering it for two full hours.  There’s no real theme, the plot doesn’t really advance, and, barring one instance that is very rarely addressed, no real character development.  Instead, it’s just two hours of “stuff.”

Said stuff involves the surviving kids from the first film – including leader Thomas (Dylan O’Brien), the girl Teresa (Kaya Scodelario), the sidekick Newt (Thomas Brodie-Sangster, deserves better), and the Korean guy Mihno (Ki Hong Lee) – being rescued from The Maze and taken to a secure facility, headed up by Janson (Aiden Gillen, of indeterminate-accent), which is supposedly a stopping point before they get taken to a safe place.  Thomas, however, smells something fishy and a brief investigation of the facility with the similarly curious Aris (Jacob Lofland) reveals that the place is a WCKD installation, the same people who ran The Mazes in the first film, and that the “safe place” that certain kids get taken to each night is actually a room where their blood, which is why the kids are immune from an apocalypse-causing disease known as The Flare, is drained in an attempt to find a cure.  Thomas and friends then break out and head off in search of a resistance group who might be able to help take down WCKD.

And, err, that’s it in terms of plot momentum.  After that, it’s just “stuff.”  In a way, The Scorch Trials feels very much comparable to a videogame, in that the plot and overall end-goal feels very superfluous to the “stuff” that happens on the way there.  Most specifically, The Last of Us with the non-stop “one thing after another”-ness of Uncharted, just without the character work or thematic depth of The Last of Us.  See, it turns out that those infected by The Flare go all zombie-like, move and often look like the victims of the Cordyceps Virus from The Last of Us, and spread their infection to supposed immunes through biting in their quest for human flesh.  Therefore, a good 40 minutes or so of The Scorch Trials basically turns into a zombie movie.  A pretty decently tense one, too, I might add, with well-designed monsters (assuming you don’t shine too much light on the cost-cut CG of full-term “cranks” anyway).

That’s the great trick of The Scorch Trials.  Director Wes Ball is so good at manufacturing thrills and keeping your attention on those thrills, that he can basically distract you from the fact that the core of the movie is completely empty for a good long while.  After all, now we’re escaping from WCKD’s base!  And now we’re in an abandoned mall!  Oh, crap, we’ve woken up a bunch of zombies!  Run!  Oh, no, somebody’s been infected!  Crap, WCKD are still hunting for us!  Oops, we’ve stumbled upon an outpost of shady people, and Giancarlo Esposito is here along with a second girl whose trait is snarking which makes her different from The Girl because The Girl never snarks!  And now WCKD is raiding the place!  EXPLOSIONS!  Full-term zombies!  Alan Tudyk!  Drug party! 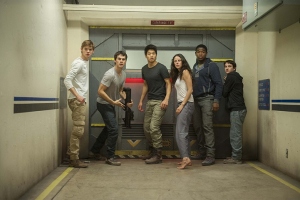 And I must admit, this really did work on me for a lot longer than I thought it would.  Again, Wes Ball is a pretty talented action-thriller director and he knows how to keep the pace up, which is absolutely vital for a film like this.  Because it has nothing going on underneath, the moments where it slows down just highlight how empty the enterprise is and lead to scenes that should be legitimately emotional – like a scene involving the fate of said infected party member – working and resonating on absolutely no level whatsoever.  But he does keep that pace up, and I found it genuinely engaging on a base level because of that “one thing after another” mentality.

However, there will always come a point where empty thrills will cease to have their desired effect and one realises that nothing is really going on, and, at 2 hours and 10 minutes, you’d better believe that this hits The Scorch Trials hard.  The film never leaves Thomas’ point-of-view, which is smart in terms of putting us in his head-space, making sure that we don’t learn more than he does and waiting for him to catch up, but it also means the viewer placing a lot of trust in the series as a result.  Trusting that, no matter how pointless or confusing that this seems now, everything will make sense in the end.  But Maze Runner has not earned that trust, because it hasn’t crafted characters or stakes or any theme that justifies holding out that long to see it come together, and the last time I trusted Maze Runner… well, I got the incredibly shitty ending to The Maze Runner.

It’s putting plot and mystery at a premium, at the expense of any theme besides “Corporations are BAD” and any character work whatsoever.  I’ve spent two out of three – hopefully, assuming Wes Ball comes back – films in the presence of these characters now and the only thing that they each have going for them is the charming and talented face stuck with what could very charitably described as a “role.”  The film threatens to start doing something interesting with Teresa, The Girl, as WCKD have unlocked the memories of her time before being shunted into The Maze and she, therefore, is being flooded with memories that tell her that WCKD may actually and genuinely be trying to work in everyone else’s best interests.  This could set up some interesting conflicts and dynamics within the group… but it’s literally mentioned once near the beginning and then promptly ignored until it’s time for the incredibly obvious to happen for our finale.

Essentially, The Scorch Trials is just 2 hours of running out the clock, under the promise that this will all be totally worth it come the finale in about 18 months’ time.  Again, though, I will admit to being somewhat gripped for a large chunk of the film’s runtime; that videogame style “one setpiece after another don’t stop now keep on going” design doing precisely what it was intended to do for far longer than it arguably should have.  That said, I can’t really recommend this to anyone, nor can I exactly give it a passing grade.  I just don’t trust this series to stick any kind of landing, not when the first film already fell flat on its face come Ending Time, and not when this series doesn’t really seem to be building up to anything right now.  It just hasn’t earned it and, more importantly, it shouldn’t have to.

There needs to be a reason as to why you’re demanding 2 hours of your audiences’ time.  “Trust me, this will all make sense when you give us another two hours in eighteen months’ time,” is not an adequate reason.

Callie Petch is only seventeen and they wanna to be mysterious.