It may not fully work for everybody, but Neruda is an inventive and very entertaining approach to the mythmaking biopic.

Disclosure: This review was made possible thanks to a screener provided by the film’s UK distributor, Network Releasing.

Pablo Larraín has managed to luck himself into some surprisingly timely release dates, this past year.  Hot on the heels of his English-language debut, the phenomenal and soulful Jackie, comes yet another unconventional biopic, this time from his native Chile, Neruda.  This kind of timing has inadvertently managed to fashion itself into something rather serendipitous, too, since both Jackie and Neruda, at least upon first glance, share many of the same traits as one another.  Both eschew the usual biopic track of trying to squeeze every last detail about its subject into a Cliff Notes two-hour runtime, in favour of a deliberately constrained timeframe less dwelled upon by history.  Jackie the days after John F. Kennedy’s assassination through the eyes of his wife Jackie, Neruda the 14 months that poet and Senator Pablo Neruda (Luis Gnecco) spent in hiding in his home country of Chile after communism was outlawed.  Both deal with the tangible death of progressivism and idealism in their respective countries, both explore themes myth-making and narrative-shaping, and both have been released right at the times when reality provides a perfect mirror against which each film can reflect.

Yet Neruda manages to shake off any “companion piece” labels or fears that it may be overshadowed by Jackie by, at the very latest, the halfway mark.  See, Neruda does tackle serious themes and events – how fascism attempts to smear and delegitimise heroic figures of the people, how said figureheads can be deeply flawed themselves, and the question of whether Pablo’s staunch Communist beliefs are undermined or hypocritical by his nature as a highly-successful verging on bourgeois poet – but it does so in a surprisingly playful way.  The main conceit of Neruda is that it is a cat-and-mouse thriller where all of the thrills are deliberately and knowingly manufactured.  Pablo is on the run from the government, that much is true, pursued by the Chilean Chief of Investigations, Oscar Peluchonneau (Gael García Bernal), who isn’t a real person yet handles the film’s omniscient narration and believes he’s in a film noir, complete with wild, deliberately overwritten monologues that often intentionally tip over into surprising hilarity. 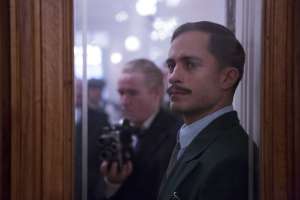 At roughly the halfway point of the film, Pablo is hosting a secret reading of some of his new poetry to a select group of friends and fellow communists or communist sympathisers, when he is accosted by a drunk working-class woman who lays out her theory on his situation.  The Chilean government gains legitimacy from chasing Pablo and branding him an enemy of the state, but it can’t ever actually arrest him, for that would turn the situation into an international incident which is something they can’t deal with.  This is a theory that appears to pierce right through to Pablo’s core, since many of the scenes we see of him depict a man who can oftentimes be incredibly self-centred and visibly chafes against having to be sequestered away without ever feeling any real danger, and it explains away the film’s gradual shift into a full-on heavily-fictionalised film noir.  Complete with superiority-obsessed cops who form a bond with their always elusive target, many sequences of Pablo escaping the “clutches” of Oscar through careful disguise and crowd-blending, and even a final confrontation that takes place in snow-covered plains (of the Andes).  Most of what we are seeing has been somewhat fictionalised by a man, our central figure, who is effectively bored out of his mind.

For as obnoxiously “clever” as that sounds on paper, however, writer Guillermo Calderón’s screenplay does utilise this conceit to make real points about things other than endless narrative metatext.  Oscar’s ever-present narration, even chiming in at a moment when one of Pablo’s various bodyguards thinks they’ve been found to mention that he’s still lost and has no idea where they are, is constantly surveying and analysing Pablo from afar with often objectively-false observations about his character.  Yet, for every off-base interjection, Oscar’s narration is almost always based upon at least a minor sliver of truth, an acknowledgement of Pablo’s insistence on being the centre of attention, of perhaps even touristing the kind of pain that everyday workers suffer through in order to foster his art evermore.  Pablo at one point coldly tells his wife Delia del Carril (Mercedes Morán), whom he frequently cheats upon at brothels, to kill herself as that way he’ll “write about [her] for another 20 years.”

Oscar ends up as a sort of self-reflection of Pablo himself, both an outlet for the latter to indulge his love of crime and violence novels, and to try shaping the narrative of his fugitive state into something that’s both more exciting for him as he’s living it and for him to sell to the rest of the public in its aftermath.  Oscar, as you’d expect, is not exactly thrilled about this arrangement, especially as the realisation sets in for him that almost everybody else we’re meeting in this story has similarly been twisted slightly to better fit Pablo’s narrative.  If Jackie was about us watching Jackie Kennedy trying to craft the mythology of her departed husband in real-time, Neruda is us watching the mythology that Pablo sculpted for himself after the fact with a secondary character who is only just aware enough of the kind of story he has been crafted for and is verbally displeased about it.  And yet, even despite that, Calderón and Larraín still craft a real human being at the centre of that narrative.  It’s almost like, by deliberately steering into the mythology and the rhapsodising of a traditional biopic, the pair have managed to expose its artifice and shine a magnifier on the flaws and humanity that typically get lost otherwise, particularly with how meditative the film can often be despite coming in well under two hours.

Because of this, however, I can’t sit here and tell you for certain whether I believe it fully works or not, at least in the way that Great Films do.  I personally felt, because of this conceit, that there’s a sort of coldness and remove to the film which wasn’t present in Jackie.  Or maybe that’s just as a result of Jackie’s themes being more compatible with my own and my emotional state at the time of seeing that.  I certainly can’t fault Neruda on a technical level to any degree.  Cinematographer Sergio Armstrong, director Larraín, and editor Hervè Schneid do a phenomenal job at invoking the feel of a film noir and drawing attention to the artifice of the story on display – most specifically, many of the film’s conversation scenes take place in three different locations and staging at once, slowly disconnecting from a plausible reality and more into a stylised fiction with each change – whilst the central performances from Gnecco and particularly Bernal are often magnetic, and the film is always incredibly entertaining to watch.

More than anything else, though, Neruda is refreshingly different.  Long-time followers of my work, particularly of my former student radio show Screen 1, will be aware that I have come to react to any inbound biopics with a sort of dread, what with my having been exposed to far too many staid Great Man movies that do nothing more than visualise a Wikipedia article on its subject with no insight or commentary on the thing I am watching.  They’re far too safe, too snobbishly dignified, and too goddamn samey to elicit any sustained reaction or leave any lasting impression.  Neruda, as you hopefully may have gathered by now, is almost nothing like those aforementioned films, and whilst I may not have had the kind of connection to it that I typically get from Great Films, I can say that I have not been able to stop thinking about it ever since I viewed it.  To that extent, does that not mean that Neruda does in fact work, albeit in a different way than I might’ve expected from films ostensibly like it?

What I can say for certain is that Pablo Larraín has now firmly established himself as, to me at least, one of the most interesting and quietly ambitious filmmakers working today.  Neruda may not exactly be a Great Film, but experiments like this don’t particularly need to be.  Unconventionality that works is its own kind of Greatness.

Neruda is out in UK cinemas now.

Callie Petch is watching the detectives.

One thought on “Neruda”