Lady Macbeth is trash, and I don’t mean that as an insult.

This review contains allusions to SPOILERS.  Proceed at your own risk.

The obvious reason why Lady Macbeth has named itself after the character from one of William Shakespeare’s most famous plays is because it’s based on the 1865 novella by Nikolai Leskov.  The obvious and non-pedantic reason why Lady Macbeth has that title is because this film’s Katherine (Florence Pugh) shares much of the same characteristics and personality as Lady Macbeth herself does in the play.  Both being Machiavellian mistresses of chaos, driving their less-scrupulous male partners to commit dastardly deeds in search of power, putting on brave faces to those who could expose them whilst said partners proceed to break down under the guilt of it all, before committing cowardly acts once their reckoning comes crashing down upon them in order to avoid the consequences.

That’s the obvious reason, but there’s actually another far more fitting reason for why Lady Macbeth is named so.  See, and this is a fact that has become lost over the centuries as Shakespeare’s works became canonised as classics and mandatory studying in Secondary Schools nationwide: Shakespeare is trash.  Despite the now-archaic flowery language that makes up its witticism, despite the libraries full of academic analysis pouring over every last word in order to wring every last speck of a drop of meaning available, despite there being entire royally-blessed production companies dedicated solely to performing these works and therefore giving them an air of respectability, much of William Shakespeare’s works were trash.  Melodramatic nonsense aimed squarely at the cheap seats and commoners, for lack of a better term, of his time.  They may have occasionally touched on some heavy themes, but mostly they are ridiculous, silly, intentionally provocative, trashy works that have a strain of fun in them, even the tragedies.  This is why, conceptually at least because he is not a good filmmaker, Baz Luhrmann’s Romeo + Juliet is probably the best Shakespeare adaptation of modern times, since it tried to re-contextualise that dynamic – of ridiculous trashy nonsense with enough of a distance for the tragedy inherent within to properly boil to the surface – for the late 20th century.

Shakespeare plays are emotionally truthful, or removed enough to skirt around questions of irresponsibility and bad taste, but also audaciously melodramatic and often fun.  That’s the wheelhouse that Lady Macbeth is playing in, although it takes a while for that to become apparent.  Set in the mid-1800s, Katherine has been sold into a loveless marriage with the much older Alexander (Paul Hilton), as Alexander’s comically-evil father Boris (Christopher Fairbank) wants Alexander to father a legitimate heir to their land already.  Katherine’s days are spent being tended to by the family’s black servant, Anna (Naomi Ackie), remaining confined to the large cavernous house, and generally being dehumanised as nothing more than a piece of furniture.  When both Alexander and Boris leave for a week, Katherine meets one of the men who works on the land, Sebastian (Cosmo Jarvis), and the two begin a heavy, passionate affair constantly at risk of being exposed from all sides and which they go to increasingly desperate lengths to cover up.

Theoretically, in that set-up, this is a film about misogyny, class power dynamics, racism, subjugation, and female agency and sexual freedom, that initially appears to be presented like a very serious period drama.  Director William Oldroyd is shooting in a deliberately gothic, low-budget drama vibe, with studiously composed shots of deliberate class and grace occasionally being juxtaposed by brief sequences of action that were clearly filmed by a drunk uncle in desperate need of a piss.  But that direction seems to brush up awkwardly against Alice Birch’s screenplay which is, in a word, blunt.  The men act like R-rated versions of Saturday morning cartoon villains, dialogue prefers to batter the themes of the story into one’s face, and several sequences that I assumed were supposed to be tense instead caused much of the audience I was viewing it with to burst out into prolonged bouts of laughter.

Audience laughter at a screening is a tricky beast.  Particularly when the group mentality of that sort of reaction runs counter to how you’re reacting to the film on-screen.  I’ve had screenings where people laughed in a way that made sense but still felt kind of wrong and insensitive given how I was seeing the scene.  Anomalisa was probably the biggest example of this, in that it is technically a comedy-drama with intentional laugh lines, but so much of the film was such an uncomfortable and heartbreaking experience for me that the often-uproarious laughter that greeted much of the film, whilst fair, still felt wrong to me.  I’ve also had screenings where people have full-on laughed at stuff they should not have, ultimately taking away from the screening – apparently cat reaction shots are the biggest causer of this, given how a screening of diehard Hunger Games fans nearly pissed their pants during the conclusion of Mockingjay, Part 2.

But lest you think this is me turning into some kind of elitist snob complaining about common folk ruining the sacred experience of watching movies, sometimes this kind of open audience reaction can add to the experience or, in the case of Lady Macbeth, make one understand what the film is actually going for.  And at a certain point, most specifically the moment where Katherine drags Sebastian out of the closet he is hiding in in order to jump his bones whilst Alexander watches to near-applause from my screening, I got what Lady Macbeth was going for.  I got that it was a deliberately simplistic, trashy melodrama dressed up in the skin of something classy and serious, in the vein of modern views on the works of Shakespeare.  Every act of rebellion, no matter how seemingly innocuous, aiming to draw cheers from its viewers, every villain being so loudly despicable that I half expected boos to erupt during their breaks in dialogue, every major action so audaciously silly and ridiculous that you could back them with extracts from various Benny Hill soundtracks and lose nothing as a result.

Now, of course, this does lead to the moral question of: should this all be raucous fun?  One of the film’s last beats gets delayed – to such an extent that I almost thought the film was going to chicken out of showing the act altogether; I was preparing to get very cross about it – but eventually arrives and is, objectively, the horrifying point of no return for our protagonists.  But it’s delivered in much the same directorial style as the rest of the film, so it can’t help but carry a strain of bad taste fun.  This is also without mentioning the incredibly precarious balancing act that occurs with those mostly-unexamined themes racial power dynamics and subjugation, all just being left as window-dressing for Very Bad People doing Very Bad Things to one another in the most knowingly playful of ways.

Lady Macbeth mostly skirts around that moral quandary, though, through a combination of its blazing speed (it is 89 minutes and does not mess around in the slightest), Oldroyd’s direction and Birch’s screenplay – which, whilst clearly loving playing the crowd like a symphony, also refuses to openly, blatantly judge anybody involved, keeping just enough of a remove to avoid falling into any unfortunate implications or dreary droning soapbox moralising – and the work of Florence Pugh as Katherine.  Pugh has had only one film credit prior to this, as one of the ensemble in 2014’s The Falling, but she bursts off the screen here like an old pro.  She is, in a word, magnetic; clearly relishing the chance to play such a complex character that starts off with all of the viewer’s sympathies before sliding slowly down the path of unrepentant villainy.  Pugh commands attention, vital since she is the centre of the film around which everything else rotates, just like a good Shakespearean lead. 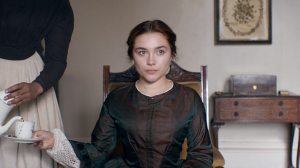 I would hesitate to call Lady Macbeth “great,” partly because its commitment to crowdpleasing trash means that it constantly steers itself away from any real depth, and partly because I did spend much of the film wondering just how “in” on the central joke it was, but it’s a damn fun spectacle whilst it lasts.  A debut that revels in audacity, muckraking, and playing to the cheap seats with an infectious gleeful wink that’s honestly hard to resist, and a career-launching lead turn from Florence Pugh.  It may not be Shakespeare, but it’s Shakespearean, and that’s not bad company to be in.

Callie Petch is just happy to serve you.