Note: a version of this article originally ran on Set the Tape (link).

I am not going to waste your time by recounting at length the facts of the story that brought A Charlie Brown Christmas into being.  How it came about thanks to a spur-of-the-moment lie to sponsors Coca Cola on the part of Executive Producer Lee Mendelson when he was cold-called about the possibility of a Christmas special.  How Mendelson, director Bill Melendez and Peanuts mastermind Charles Schulz brought the animated special to life from initial pitch to televised airing in just six months, an insane production schedule for 1965 that they and their animators barely met (completing the special 10 days prior to airing and $20,000 over budget).  How CBS absolutely hated it – hated the slow pacing, hated the jazz soundtrack, hated the amateur patchwork voice acting from non-professional children, hated the rough and often off-model animation, despised Linus’ big Bible-quoting monologue about the true nature of Christmas – and only aired it because the listing was already in TV Guide.  How even Melendez sincerely feared that he’d “ruined” Peanuts prior to air.

How it became an instant rapturously-received classic upon its premiere on December 9th 1965.  How it was the second most-watched programme of that week with a 45% audience share.  How it won Melendez, Mendelson, and Schulz both an Emmy and a Peabody.  How it ushered the half-hour animated Christmas special into regular Christmas programming rotation – soon followed by other seminal works like Chuck Jones’ How the Grinch Stole Christmas and Rankin/Bass’ Frosty the Snowman.  How it laid the foundation for several decades of Peanuts’ expansion into animation, with 45 television specials and five feature films at time of writing, and cemented the franchise’s popularity worldwide in countries that didn’t get the strips.  How it has been re-run every Christmas season without fail since that premiere 53 years ago.  How it ended up being credited with killing off the fad of aluminium Christmas trees after they were derisively featured in the special as the embodiment of crass commercialism antithetical to the spirit of Christmas.

Those are the facts.  You likely already know them or can go elsewhere and find extensive articles going into great detail and analysis about a landmark televisual event that has been picked over and re-evaluated and discussed to within an inch of its life over the years.  There are no new angles to take when talking about A Charlie Brown Christmas.  So, instead, allow me to get self-indulgent and talk about why I still watch A Charlie Brown Christmas and, consequently, what Peanuts means to me. 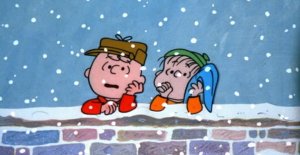 I don’t remember exactly the year that I first saw A Charlie Brown Christmas, but it was back when Boomerang aired nothing but actual old cartoons from the Hanna-Barbara and Warner Bros. archives.  Thanks to production rights shenanigans, Boomerang UK once had brief control of broadcasting rights for The Charlie Brown and Snoopy Show which meant that other Peanuts specials were brought along with them.  Hence, one holiday season, sitting down to watch A Charlie Brown Christmas despite having never heard of Peanuts before.  No matter how out-of-time the special may feel today in 2018, I can assure you it feels exactly the same no matter when you watched it.  A Charlie Brown Christmas really does stand alone even in a schedule crammed wall to wall with fellow 60s prime-time animated sitcoms.  A lethargic pace, an embrace of the rough edges and cut corners in defiance of the rigidity of old Hanna-Barbara series, no laugh track…

But, of course, what really sticks out is the singular borderline-existential tone that drives proceedings.  Unlike with, to name just one totally random example not at all indicative of Boomerang’s scheduling choices around any holidays, Scooby Doo, Charlie Brown doesn’t strain for laughs and, unlike almost every other Christmas special ever, it doesn’t attempt to enforce an almost sickly sense of festive joy upon the viewer.  The first line of spoken dialogue in the special, occurring when a walking Charlie Brown and Linus van Pelt stop at the thinking wall that sparks so many of Schulz’s signature strips, is “I think there must be something wrong with me, Linus.  Christmas is coming, but I’m not happy.”  It’s a disarming opening for a first-time viewer, no matter the age when you first come to it, especially when backed by those melancholic yet seasonally-appropriate jazz stylings of Vince Guaraldi (also some of the best Christmas music ever) because it’s so direct and vulnerable.

After all, most Christmas specials are all about enforced merriment to an aggressive and potentially off-putting degree.  Actually, scratch that, most Christmas media period is saccharinely sweet and overblown maximalism, painting the holiday as a “magical” “merry” “most wonderful time of the year” that’s perfect and gleeful and sweet for everybody.  And whilst I’m not going to sit here and bah humbug the entire Christmas season, there’s something incredibly reductive and dishonest about such a blanket portrayal.  Everybody is happy at Christmas, everyone loves Christmas, and those who don’t – as in timeless alternative Christmas stories about miserable bastards like A Christmas Carol and How the Grinch Stole Christmas – are actually bad people who need to be shamed into changing their ways and embracing the season.

Such a shaming never happens in A Charlie Brown Christmas.  Charlie Brown is seasonally depressed, Lucy van Pelt admits to feeling the same way at times and, whilst their reasons for being so are comical given their ages – Chuck is down due to a lack of direction in life and the unfettered commercialisation of the holiday, Lucy is down because she never gets the one present she really wants each year: “real estate” – their feelings are not discounted or shamed.  Schulz knows that Christmas is not a purely and perfectly magical time of year, rather a corporate-mandated holiday that has perverted the original religious meaning of the season into something largely unrecognisable that, if they’re not religious, one just has to find their own meaning and value in.  Whether that be through community outreach (the school play Chuck is roped into directing), holding onto one’s ideals (the tiny wilting but natural Christmas tree he picks up) or the little moments of hope and joy that help get one through the day (when the other kids decorate the tree at the special’s end).

And that’s been the essence and appeal of Peanuts from the very beginning to its eventual end with the passing of Schulz in 2000.  It’s a strip about childhood that’s completely absent of nostalgia blinders that typically accompany depictions of childhood.  It’s sober, oftentimes sombre, willing to depict and dramatize the mundane disappointments and anxieties of everyday life that, yes, even children may think about sometimes.  (The first time I seriously thought about death, I was 11 and ended up having the kind of legitimate sobbing breakdown over it that has followed me since.)  Schulz doesn’t shy away from those subjects in his strips and neither does he in the special, translating many of Peanuts’ old standbys into an animated medium.  Commercialism of Christmas is the big overriding subject here, but he also addresses the feeling of being a constant failure through the character of Charlie Brown, unrequited affections…  Hell, we never actually see the planned Christmas play, but there’s a refreshing low-key honesty in the depiction of the nightmare in trying to organise a such children’s play.

Plus, it’s funny.  Whilst there is kind of an overarching narrative, A Charlie Brown Christmas constructs all of its scenes and dialogue exchanges in much the same way that a four-panel or Sunday comic strip works which presents a rather unique and Schulz-ian feel to the special that remarkably holds in the transfer to the medium of animation.  Some of these exchanges end in a hilarious conventional punchline (Schroeder’s “Jingle Bells” is legitimately one of my favourite Christmas-related jokes of all-time), some go for something more physical (pretty much anything to do with Snoopy), and others withhold the punchline in favour of an honest emotional outburst (like Charlie Brown’s defeatist “everything I touch gets ruined”).

I’d say that it’s this marriage between high-brow and low-brow, of chasing Linus’ dismissal of Charlie Brown’s ambivalence towards the holiday season with the ice-skating calamity at the special’s start, that gives Peanuts and A Charlie Brown Christmas its charm, but Schulz is on record as viewing comics (including his own) as inherently commercial entities so he likely saw no difference between those distinctions.  Like another beloved institution of American entertainment primarily associated with children, Mister Rogers’ Neighborhood, Peanuts never talked down or patronised and used that slow pace to create something warm and comforting yet simultaneously melancholic.  Christmas, in that respect, was kind of made for Peanuts, that balance between the cold (here the harshness of life) and the warm (here the comfort of relatability and being understood), even before A Charlie Brown Christmas knocked it out of the park.

So, going back to that first viewing in this framing device of mine.  I wouldn’t actually see A Charlie Brown Christmas again for several years after that first viewing.  Part of that was because Boomerang soon lost the rights to air Peanuts material and no other channel in the UK ever bothered to pick them up afterwards, but I also may have been just a touch too young to fully understand it.  I was, after all, a child and Christmastime really is magical for young children because the parents you never properly appreciate have slaved away in order to get you cool awesome presents that are a tonne of fun to unwrap and therefore don’t have time to fixate on seasonal melancholia.  But the faint memories of the special always stuck with me and upon my eventual wholehearted embrace of the Internet in the late-00s, plus endless parodies and references to it (such as this Scrubs gagdub and this homage by Canadian sketch-comedy group LoadingReadyRun), I ended up rediscovering A Charlie Brown Christmas as well as finally reading Peanuts itself.

And every Christmas since, I’ve watched A Charlie Brown Christmas.  Initially for the nostalgic familiarity, eventually as a tonic for the militant ritualised merriment of other seasonal specials.  Nowadays, as I’ve spent more time examining my mental state and trying to grapple with my long-standing depression, I’ve found myself relating more and more to that opening exchange.  As I’ve aged and Christmas has lost much of its magical lustre, mostly becoming another time of the year for me, it’s nice to have a special that’s seasonal without becoming saccharine.  That’s comforting without becoming excessively sentimental.  That’s off-beat without becoming try-hard.  That’s, above all, emotionally honest.  Charlie Brown is seasonally depressed and he doesn’t know why, and that’s not a bad thing.  His heart doesn’t need to grow three sizes, he’s not a miserly evil cheapskate, he’s not suicidal.  He’s just trying to find his own meaning in the season and struggling, like many of us do, which A Charlie Brown Christmas tells us is ok because, let’s be honest, who can’t relate at least sometimes?

Callie Petch is in the backseat of their body, just steering their life in the video game.