This article originally ran on Set the Tape (link).

Callumstradamus strikes again, friends!  Last weekend, I, a naïve cherubic complete forking inept imbecile, made the bold proclamation that 1917 was very likely going to repeat atop the box office over the then-upcoming Martin Luther King holiday weekend on account of, direct quote, “what else are people gonna see?  Dolittle?”  Well, I wasn’t completely shown up since Dolittle didn’t end up topping the charts, but I am once again Boo-Boo the Fool for I had clearly severely underestimated audience nostalgia for the Bad Boys movies.  I, like a liberal snowflake elitist cineaste film snob, had misguidedly assumed that audiences in 2020 would maybe not want to go see a new Bad Boys movie, one without Michael Bay no less, on account of the piles upon piles of corpses that litter the road from other failed efforts to resurrect old 80s/90s genre properties over the past few years – who can forg-member Rambo: Last Blood, Men in Black: International, Terminator: Dark Fate, et al?  But it is indeed I, the loquacious self-involved bumblefart, who has the egg upon their face!  Bad Boys for Life is not only your new #1, its three-day opening of $59 million blows past the four-day performance of 2014’s Ride Along to win the title of “Best MLK Opening Weekend Ever.”  Even more important than that, however, is such a rousing performance has given star Will Smith his first non-Disney/Comic Book win at the box office in… *scrolls, keeps scrolling* geez, Men in Black III was eight years ago?!

(Hmm?  No, American Sniper does not still hold the MLK opening weekend record, no matter what alleged professional websites may say on the matter.  That film opened in limited release the December prior then expanded over MLK weekend.  Doesn’t count.  Stop ruining fun!)

Now, as for the much maligned Dolittle – heh, heh, I wish they’d do-less; I’m such a unique witty genius – it turns out that, actually, yeah maybe people did want to go see the weird talking animal family movie with the big famous beloved movie star regardless of how many critics made a meanie-stinky face at it.  Not enough to make it profitable given that $175 million price tag, mind, but just enough to make me look like a total nitwit.  $22.5 million for the three-day with Universal expecting $30 mil over the four-day, both more than good enough for second-place.  1917, meanwhile, even following on from extremely strong word-of-mouth upon its expansion the previous weekend and those 10 Oscar nominations, slid a surprisingly hard 40% into third place with $22.1 million (admittedly a figure close enough that it conceivably could leapfrog Dolittle once the actuals come in).  Y’know, it’s a good thing this isn’t my job that people are paying me to do otherwise I would definitely have been sacked a good dozen times by now.

Speaking of the Oscars, those bad nominations came out last Monday so here’s the customary check-in to see if any of the major nominees received notable bumps.  On the “hard narp” end: there’s the aforementioned 1917; Bombshell continues shedding cinemas and money (just $630,000 from 410 theatres) because, seriously, who asked for this; ditto for A Beautiful Day in the Neighborhood, minus the “who asked for this” snark cos that movie is wonderful.  On the “hard yarp” end: Disney remembered that they’re the ones releasing Jojo Rabbit so maybe they should put it in more cinemas already and, whaddya know, doing so immediately gave the film its fifth-best weekend yet ($1.4 million from 1,005 theatres); Ford v. Ferrari and Once Upon a Time… in Hollywood were put back into cinemas, despite the latter already being out on home media, and whilst they didn’t do great ($1,096,000 and $310,000 respectively) they at least improved on last weekend; whilst Parasite more than doubled its theatre count and almost doubled its take from last weekend ($1.745 million from 843 theatres) despite now being in its 15th week of release in the US whilst the UK date is still a full month away, COME ON! 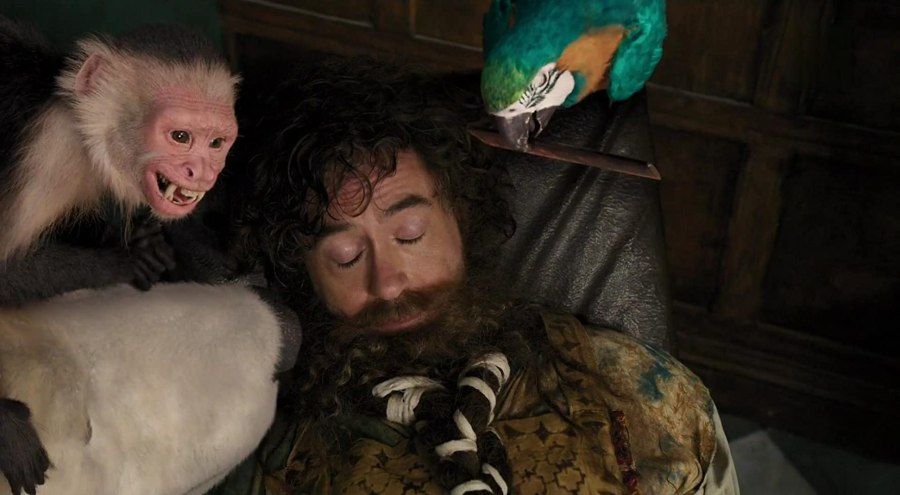 By the time you read this, I’ll have seen Bad Boys for Life!  I am on It, for once!  Just still not enough to actually have things to say during the relevant spaces in a timely fashion.  I did, however, finally get around to watching both of the Bay Bad Boys this past week!  The first has fun action but is out-ratioed by an immensely boring teen-sex comedy starring and about grown-ass men in the near-30s.  Whilst the second I reall…  I reall… *starts heaving*  I…  *sobs*  I REALLY LIKED IT, OK?!  I REALLY LIKED BAD BOYS II!  PLEASE FORGIVE ME…  *inelegant blubbering occurs*

February’s the dump month in the UK and this here carcass is being propped up against Birds of Prey on the 7th, hence why I have not already watched Dolittle fourteen times.

As promised, my review of this went live on Friday to kick off what shall hopefully be a prosperous year for yours truly writing weekly film reviews at Soundsphere Magazine.  Get some regular structure going in my life, y’know?  Film’s fine, as mentioned. [FUTURE EDIT: HAHAHAHAHAHAHAHAHAHAHAHAHAHA.]

4] Jumanji: The Next Level

A news story I had somehow completely forgotten to bring up before now is that the presumably-cursed Uncharted movie – the one that’s been in attempted-development for well over a decade; I genuinely remember one of my first posts over at the long-defunct Screened.com being a “Things I’d Like to See” listicle which slobbered over Nathan Fillion and got creepy about Summer Glau because I was 15 and a hack and 15 year-olds should never be allowed to write anything on the Internet – lost yet another director.  Travis Knight bowing out makes that the sixth director Uncharted has officially lost.  Two more such stamps on the loyalty card and it’s eligible for a free Paul W.S. Anderson!

5] Star Wars: The Rise of Skywalker

In Moderate Release news, GKIDS brought over Makoto Shinkai’s monster hit follow-up to his monster hit anime Your Name, the fantastical romance Weathering With You, and got themselves a monster hit.  Before we even hit the three-day, due to the studio giving it an early special engagement run on Wednesday and Thursday in 1,020 screens, it had already managed to become GKIDS’ biggest movie ever, outgrossing Mary and the Witch’s Flower, but Weathering was able to keep that momentum through the weekend even with half its theatres slashed: $1,731,372 from 486 screens for a current total of $4,777,622.  It’s almost like a generation raised on imported Japanese cartoons as late-night filler on kids’ channels, paired with the rise of the Internet giving them a place to congregate and love these things, might want to watch these in a cinema en masse or something?

Look, I know that I promised to shut up about both #BAFTAsSoWhite and #OscarsSoWhite until my yearly preview piece for the former – that’s coming next Wednesday, for the record – but I just have to share this short interview Steve McQueen gave The Guardian the Sunday after the BAFTA nominations came out.  Myself and Kelechi have scanned this a dozen times each and cannot detect even the tiniest trace of wrongness in the man’s words.

Just hang in there five more days (at time of writing).  I’ll finally get the chance to see this again this coming weekend, so please just let it hang on a little while longer, my local Cineworlds!  I guarantee you that nobody is going to go see The Grudge, particularly not when The Turning is out on the same day!

So, I’ve finally started watching Deadwood.  Been meaning to for a while, much like a lot of my giant-ass clogged-up backlog of shows to watch at some point, but finding a (movie-less) complete Blu-Ray boxset at CeX for £12 felt like as good a time as any.  Only two eps in at time of writing but I’ve gotten Timothy Olyphant in a cowboy hat, Ian McShane growling out the phrase “cocksucker” on average once every eight minutes, and am now intimately familiar with what Nick Offerman’s (possible stunt) penis looks like, so I’m currently satisfied.  May (spoiler-free) update as I get further along in other slots where I’ve run out of relevant things to say.

Depending on when the piece runs, I’ll either be seeing this tonight with my friend Lucy or I will have seen this the other night with my friend Lucy!  The Unlimited preview screening is for once allowing those with cards to bring a card-less friend, presumably because a torture shared is a torture halved, and our friendship is all about me repeatedly psychologically torturing her with terrible activities.  Does it reflect worse on me for doing so, or worse on her for going along regardless?  You be the judge!

Dropped out: Underwater, Spies in Disguise

Callie Petch got themselves together and they found this little song, now they got a party going on.