Note: this review originally ran on Set the Tape (link). 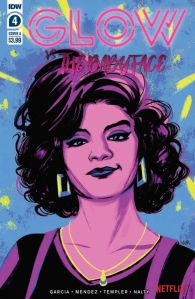 I admit to having been a touch harsh on AJ Mendez and Aimee Garcia’s run on GLOW compared to Tini Howard’s last Summer, as the first-time comic writers stumbled from time-to-time with overly verbose scripting and inelegant plotting, particularly by having their arc’s various narrative threads largely operate independent of one another.  The duo absolutely nailed the throwback cheesy 80s feel that’s crucial to GLOW, pumping it up to new heights by centring the threats on ‘vulture news reporters’ and ‘meddlesome runaway child,’ but they largely sacrificed the interaction of GLOW’s ensemble in order to foreground those new wrinkles with little of the shared camaraderie which makes the franchise so joyful to experience.  These have been very enjoyable comics to read, don’t get me wrong, but they’ve yet to measure up to the heights of both the show or Tini Howard’s initial run.

Vs. The Babyface #4 is the conclusion of their series arc and, thankfully, it’s also the first time that Mendez and Garcia feel fully at home with writing for GLOW.  The groundwork may have been clumsily laid down, but the payoff at least works a treat.  This is easily the most purely entertaining issue the duo have yet penned.  It’s also, not unsurprisingly, the one where the arc’s three separate narrative threads – GLOW’s upcoming interview with opportunistic hit-piece reporter Wendi Blayze, troublemaking runaway Elizabeth and her dirtbag psychologically abusive mother Sherri terrorising the crew, and Yolanda & Arthie’s burgeoning companionship – finally smash into each other rather than being heavily segregated as they were in previous issues.  It’s the night of GLOW’s big show where Wendi’s nationally televised interview will be recorded in between matches, with Sherri having successfully blackmailed her way into the main event in the hopes of revitalising her non-starter of an acting career, and Elizabeth being babysat by Yolanda at the latter’s strip club because Sherri is a method actor who doesn’t want to deal with her child.

Immediately, there’s a confidence and a fun to the issue that wasn’t there in previous instalments.  The dialogue is a lot snappier, getting to the point a lot faster and meaning that layout designer Christa Miesner doesn’t have to cram lengthy dialogue boxes around all corners of the panels.  There’s also a better flow to each line of dialogue that feels very televisual, characters better building off of the previous line which makes the read a tonne smoother and more entertaining.  Bringing Elizabeth into contact with all three different threads similarly brings a looser and more flowing dynamic to the character pairings, the kind that makes them all feel as if they exist in the same world rather than boxed away in their own stories.  This kind of orchestrated criss-cross culmination structure for the issue, combined with punchier dialogue, also enables illustrator Hannah Templer a lot more freedom when it comes to visualising the story unfolding as she continues to find the perfect facial expressions for various reaction shots or compressing related events into wonderfully designed intercut panel extravaganzas – most especially a page late in the issue which syncs up interview soundbites with wrestling action in a manner that cleverly resembles a network TV news report.

Garcia and Mendez wrap up the story with a refreshing speed given how relatively aimless issue #3 in particular felt, but perhaps they’ve done so too fast.  There’s a satisfaction in watching this seemingly disorganised domino train snake its way to the choreographed conclusion with a precision flourish, but I think that we could’ve gotten to this same ending with a touch more resonance had there been one more issue to spread the beats covered in this instalment out.  I wasn’t just repeatedly assuming that we were dealing with a five-issue run rather than a four-issue run out of my arse, the pacing of issue #3 in particular felt like vs. The Babyface was going to be a five-issue run and therefore the conclusion carries a slight whiff of compression when each plot is being fully resolved in the last half without much difficulty at a rate of every other page.

Still, I’m not about to become the git who’s impossible to please.  Even though it’s in a palpable rush to do so, GLOW does conclude strong and rather satisfyingly, especially in the understated grace note to Arthie and Yolanda’s relationship, and I do hope that Garcia and Mendez get a chance to try again with these characters and this world at some point now that they seem to have finally gotten a hang of it all.  I can’t root against people who include costume references to Splash in their work; give me that over yet another tired Ghostbusters costume any day of the decade.

Callie Petch was just thinking about work the dancefloor.